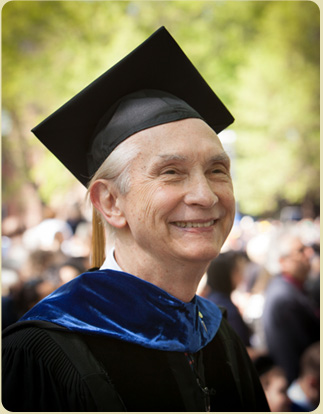 George Camp, who received his PhD from the department in 1967 with a dissertation titled “Nothing to Lose: A Study of Bank Robbery in America” walked in this year’s Commencement ceremonies along with the department’s new graduates. Back then, he left campus before graduation to begin work in the prison system, but at this year’s ceremonies the co-president of the Criminal Justice Institute and co-executive director of the Association of State Correctional Administrators finally formally received his doctorate. He told the graduate school that since finishing his PhD he has “attended our four children’s college graduations, one medical school graduation, and two doctoral graduations… All were very happy occasions, but at the same time a bit sad because I had come to realize what I had missed. I said to myself, ‘I’m going to see if I can turn back the clock.’ I asked Richard Breen, the current chair of the Sociology Department, and he said ‘yes.’ By the way, ‘yes’ has always been the operative response at Yale. It was clear from my very first day at Yale that everyone was here to help you succeed. It was never a question if you were going to graduate, it was only a question of how well you were going to do. That same culture of excellence and encouragement remains just as alive today as it was 50 years ago. It is what endears me (and probably all of us) to Yale.” Read more here - and congratulations again, George!