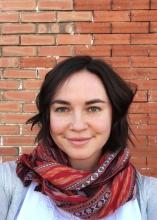 Anne is a Junior Fellow at the Yale Center for Cultural Sociology. In 2020, the Yale MacMillan Center for International and Area Studies awarded her the Pre-Dissertation International Research Grant, and the International Dissertation Research Grant. In 2019, she worked as a Pre-Prospectus Research Fellow at the Beinecke Rare Books and Manuscripts Library at Yale University. Additionally, she is a Junior Fellow of the Initiative on Religion, Politics and Society at the Yale MacMillan Center. In 2017, she received an Honorable Mention from the National Science Foundation’s Graduate Research Fellowship Program.

“Asceticism, Alchemy, and Autonomy: The Intersection of Faith and Knowledge in Puritan Opposition to the English Empire,” presented at the panel session ‘Religion and Politics in Global Perspective’ at the annual meeting of the Social Science History Association, Baltimore, MD. November 12-15, 2016. Discussant: Samuel Nelson.