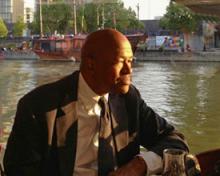 Office Hours: Mondays 4 to 6pm and by appointment.  I also make my cell phone number available to students.

Elijah Anderson is the Sterling Professor of Sociology and of African American Studies at Yale University, and one of the leading urban ethnographers in the United States. His most recent publication is Black in White Space: The Enduring Impact of Color in Everyday Life (2022). His other publications include Code of the Street: Decency, Violence, and the Moral Life of the Inner City (1999), winner of the Komarovsky Award from the Eastern Sociological Society; Streetwise: Race, Class, and Change in an Urban Community (1990), winner of the American Sociological Association’s Robert E. Park Award for the best published book in the area of Urban Sociology; and the classic sociological work, A Place on the Corner(1978; 2nd ed., 2003). Anderson’s most recent ethnographic work, The Cosmopolitan Canopy: Race and Civility in Everyday Life, was published by WW Norton in 2011. Additionally, Professor Anderson is the recipient of the 2017 Merit Award from the Eastern Sociological Society and three prestigious awards from the American Sociological Association, including the 2013 Cox-Johnson-Frazier Award, the 2018 W.E.B. DuBois Career of Distinguished Scholarship Award, and the 2021 Robert and Helen Lynd Award for Lifetime Achievement. And, he is the 2021 winner of the Stockholm Prize in Criminology.

Dr. Anderson has served on the Board of Directors of the American Academy of Political and Social Science and is formerly a vice-president of the American Sociological Association. He has served in an editorial capacity for a wide range of professional journals and special publications, including Qualitative Sociology, Ethnography, American Journal of Sociology, American Sociological Review, City & Community, Annals of the American Academy of Political and Social Science, and the International Journal of Urban and Regional Research. He has also served as a consultant to a variety of government agencies, including the White House, the United States Congress, the National Academy of Science and the National Science Foundation. Additionally, he was a member of the National Research Council’s Panel on the Understanding and Control of Violent Behavior.

Dr. Anderson has been awarded the 2021 Stockholm Prize in Criminology the world’s most prestigious award in the field of criminology.  It is awarded for his ethnographic observations and analysis of mechanisms behind violence in socially, economically and ethnically segregated areas that have greatly contributed to our understanding of how different types of social interactions among young people lead to violence.

The prize has been awarded since 2006, and recognized outstanding achievements in criminological research or for the application of research results by practitioners for the reduction of crime and the advancement of human rights.

For Inner Cities, a Challenge Beyond the N.R.A. on Gun Control

What caused the Ferguson riot exists in so many other cities, too.”

Fears of Violence During Morning Travel to School

Emmett and Trayvon: How racial prejudice in America has changed in the last sixty years.

Reflections on the ‘Black-White Achievement Gap