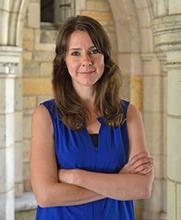 Emily Erikson is the Joseph C. Fox Academic Director of the Fox International Fellowship and associate professor of sociology and the school of management (by courtesy). She works on the emergence and development of global networks, organizations, and the institutions of capitalism and democracy. Her award-winning book, Between Monopoly and Free Trade: The English East India Company (Princeton University Press, 2014) shows how the autonomy of agents in the East India Company fostered informal information sharing and organizational flexibility that were key to the Company’s long-term success. The book illuminates the processes underpinning the emergence of early multi-national firms and the structure of early modern global trade. Her forthcoming book, The End of Equity: Companies and Politics in the Development of a New Science of Economics (Columbia University Press), identifies a crucial transformation in economic thinking in the early modern era, when moral issues took a backseat to growth imperatives. She shows that the increasing power of companies coupled with merchant’s marginal political power created the conditions that drove individual to adopt a new theoretical and moral framework for economic thought focused on national prosperity rather than individual moral behavior.

Her work has appeared in the American Journal of Sociology, Annual Review of Sociology, Sociology Theory, The Journal of Economic History, and Social Science History, among others. She serves on the council for the economic sociology section of the American Sociological Association, the editorial board for Social Science History, the editorial committee for the Relational Sociology Series. She is a founding member of the advisory board for the Journal of Historical Network Research and sits of the executive council of the Faculty of Arts and Sciences Senate.

The English East India Company was one of the most powerful and enduring companies in history. This book locates the source of that success in the innovation and internal cohesion generated through what was initially a cost-saving measure, in which the court of directors granted employees the right to pursue their own commercial interests while in the employ of the firm.
Though the Company held a monopoly on English overseas trade to Asia, the Court of Directors extended the right to trade within Asia to their employees, creating an unusual situation in which employees both worked for themselves and for the Company as overseas merchants. Building on the organizational infrastructure of the English Company and the institutional base of the rich and sophisticated market of the East, the employees built a cohesive internal network of peer communications, i.e. a social network, that was used to direct English trading ships during their voyages. This network integrated Company operations, encouraged innovation, and increased the Company’s flexibility, adaptability, and responsiveness to local circumstance.
The book thus provides an answer to the historical puzzle of why the English East India Company was such a singularly dynamic force in the expansion of trade between Europe and Asia. This puzzle is particularly compelling because it is nested within the larger historical questions of why Western Europe experienced a unique trajectory of rapid economic development and how the relationship between Europe and Asia came to shift so rapidly in the eighteenth and nineteenth centuries.
The argument is built upon an analysis of trade network dynamics, a statistical investigation of decision-making processes, and institutional analysis of ports and organizational context. This multi-method approach is designed to link macro and micro levels of analysis by offering an explanation of large-scale historical change in the world economy rooted in mechanisms operating at the level of the individuals that participated in that change.
The central theoretical issues addressed are (1) the role of social networks, organizations, and decentralization in historical change and trade expansion (2) the role of the Asian institutional context in fostering early-modern European commercial expansion.

Between Monopoly and Free Trade: The English East India Company